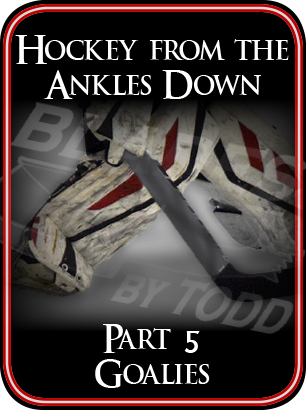 Goalie skates have changed over recent years. Actually, the way we sharpen goalie skates has changed as the techniques and styles that goalies use have changed. It used to be all goalies wanted their blades flat on the ice from toe to heel, and only enough edge so they could stand in the net.

Today, goalies are expected to skate and stickhandle, which requires a little rocker on the blade to help with cornering and pivoting. Since they spend so much time down on the ice, today’s goalies need sharp edges to help them recover to their feet quicker. Weight and strength are the biggest issues with goalie hollows.

On one hand, they need sharp edges to get up, yet on the other, they need dull edges to shuffle. Younger skaters with less strength will have difficulty trying to shuffle on skates that are very sharp. As the goalie gets stronger, the hollow can be deepened, all the time finding that balance so that a goalie can both set an edge for the push and release an edge for the shuffle as they move across the net.

The inside edge is the edge most used. I have even purposefully left the inside edge higher than the outside edge for a couple of goalies, both for stronger grip and to lessen the chance of catching an outside edge on the shuffle. Because every goalie has a slightly different style, they also have different needs when deciding on a hollow in their blades and how sharp to leave the edges.

We seem to have come to an age where the hollows are reversed from what they were several years back. The goalie’s hollows are now deeper than the forward’s hollows. Today’s goalies are even adding pieces of steel called “Overdrive Blades” to the inside toe of their boot, allowing them to push into the ice with the inside of their boot while they are down in their butterfly.

As far as the fit of a goalie skates, you can leave up to two sizes of growth room. Some skaters keep their skates a little big even after their feet stop growing to leave some room in the toe box for stopping those hard slap shots.

Very little can be done for a pronation in goalie skates. Sometimes there is a little room to move the boot inside the cowling but it is usually minimal. Overall I still find goalies pay very little attention to their edges. I still see goalies who get their skates sharpened only once or twice a year, and others who have so much rust on their blades that when the rust is finally removed the blade becomes loose in the holder. Just like the forward and the defenseman, their edges are in constant use and all these skaters should give their edges at least as much attention as they give to their sticks.