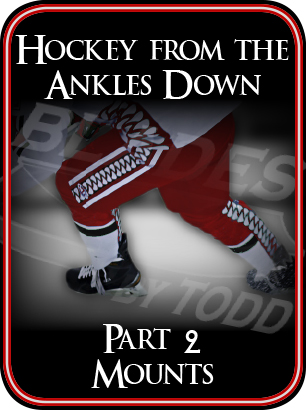 During the summer some semi-pro players will join summer adult leagues just to keep their skates under them. I’ve met professional players who had no idea that the blade could be moved on the boot to adjust for a particular skating problem. The question I always ask privately is, “I wonder how far that player might have gone if someone had noticed their foot problem a little sooner in their career?”

After a young figure skater learns to do his or her first half revolution jump, their next purchase of new skates will require them to buy the boots separate from the blades. This allows them a choice in type of blade and the ability to mount the blades in a precise location for that individual skater.

On the hockey side, players take what they get out of the box, ask to have an edge put on them, and then rarely if ever look at the bottom of their skates except to see if they need a new edge. Many hockey players look to figure skaters for tips on skating technique. Maybe they should also learn from their boot fittings and blade maintenance techniques.

Here are a couple of basic guidelines for where a blade should be located on the boot. First rule is to mount the blade back as far as possible. If the sole of the boot is longer (heel to toe) than the blade chassis, leave the majority of the extra space at the toe of the boot. A little over two decades ago we started teaching our skaters to settle back in their stride, telling the skaters to start their stride pushing with the heel of their blades, not the toe.

We have found that keeping the weight off the balls of the feet is a more efficient skating stride. (This stride being separate from the speed start, which requires the skater to get and stay on the toes of the blade for the fist few steps.) Figure skaters are commonly asked to teach efficient hockey strides, but in reality, it is the design of the figure blade that dictates the proper technique.

In order for a figure skater to keep from tripping over the toe pick, he or she is forced to settle back on the blade, and forced to use a push directed more to the sides rather then pushing straight back. For the hockey player, using this technique produces a longer push for every stride resulting in more distance for each push, thus greater speed; much like speed skaters who take this sideways push even further.
Now we look at the other end of the figure skate and see that the blade extends well past the heel, giving the skater more blade to settle back on.

Yet, it is not uncommon to pull a new pair of hockey skates out of a box and find the blade is mounted a quarter inch or more forward from the heel of the boot. Consider how much of the skater’s weight is actually hanging off the back side of the blade. Add the tail rocker on the heel of the blade (the extreme curved area that the player can’t actually skate on) to that quarter inch, and now the skater has MORE then an inch of his or her heel hanging off the back side of their blades. 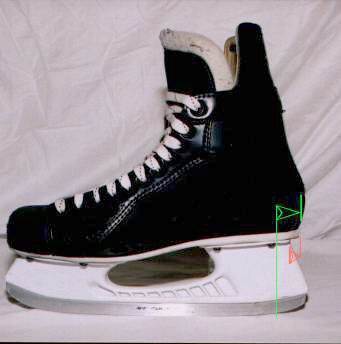 Moving a blade back on a boot will actually make it easier for the skater to get to the toes of the blade for their speed starts. Mounting a blade as close to “heel to toe” as possible will help the skater achieve their most efficient stride, as long as the boot is not too big on the foot.

Some chassis lean inward slightly, and centering the mounting plate of the chassis in the middle of the boot actually locates the blades too far to the inside of the boot. Using the manufacturer’s seam on the chassis will help line up the actual blade, by aligning the seam to the middle of the toe cap and the center of the heel. Be aware that some of the graphics and stitched seams on the boots will make finding the center of the heel more difficult than it sounds.

Now we get into an area that requires an expert be involved. Many players have pronation, or fallen arches, which will effect the location of the blade for that individual player. The mistake that nearly every buyer makes is, they assume the manufacturer has properly mounted the blade on the boot; thus, any problem the skater is having on the ice, is the problem of the skater and they just have to try a little harder or be a little tougher. If there is a problem with the ankle of an accomplished skater rolling in or out, the equipment can be adjusted to help the skater compensate.

A pronation is the act of a foot rolling inward, when weight is applied. Let us use the example of fallen arches or “flat feet”, which is usually hereditary and is solved in street shoes by adding extra arch support or using an orthotic. 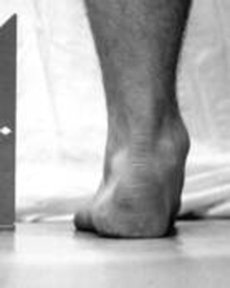 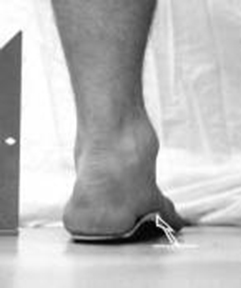 Note: there is a difference between reshaping the foot in the boot, and solving a pronation. Adding arch support or using “cookies” to build up the arches, is an example of reshaping the foot within the boot. The use of an orthotic, usually a solid insole that has some kind of twist from midfoot to heel or one side of the insole is thicker than the other, is also reshaping the foot but with the expressed intent of trying to straighten an ankle that leans in too much.

In street shoes, this twist or leaning heel acts as a wedge or shim between the ground and the foot, thus straightening the line from the heel up through the ankle. (The Achilles tendon is the best focal point for spotting this alignment.) In other words, the wedge adds an additional upward pressure to the inside of the foot keeping the foot from collapsing or rolling inward to it’s natural position.

That same wedge does not work when inserted into a skating boot. Because you are balancing on an eighth of an inch piece of steel two or three inches off the ice, there is no ground to support the shim. There is no source for the additional upward pressure because there is only air under the orthotic, so the foot goes back to its original lean. 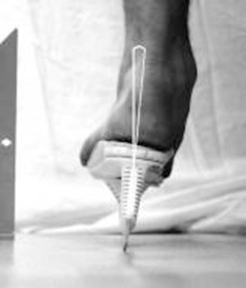 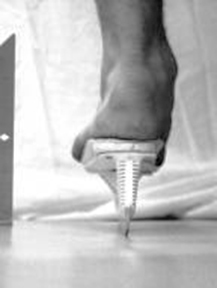 Repositioning the blade on the sole

can have huge effect on the balance

and performance of a skater.

The only way to stop a pronation of a skater is to move the blade to the inside, thus moving some of the weight on the foot to the out side. Maybe the best way to envision this is by thinking about a tightrope walker. There are some trainers and skate technicians who leave the foot in leaning position and straighten the blade by adding a shim between the blade holder and the boot along the outside edge of the boot.

My experience has been that a skater will have more power and a longer skating career if the foot can be aligned into the proper posture. Once that balance point under the heel is found, you will see a straight line from the bottom of the heel up through the ankle to the knee. I am not discounting the use of orthotics and arch supports, in fact there is much that can be accomplished with corrective insoles, but they will not stop the lean to the inside.

Many times it makes it worse, and the blade has to be adjusted for both the foot AND for the orthotic insert. What is amazing to me is how most boot manufacturers have a real problem understanding this basic law of gravity. The boot makers believe the stiffness of the boot will hold the ankle straight, and it does for a while, up to the point where the boot starts breaking in and then the creases in the boot allow the ankle to role in again.

These pressure points during break in are usually extremely painful, and can lead to medical problems ranging from bone spurs or stress fractures to muscle or ligament damage in ankles and knees. These same pressure points are also signs of what adjustments might be possible.

Since we want our boots to mold to our feet, and flex when we bend our knee, (as opposed to the plastic molded boots used for rental purposes), coaches need to recognize when a blade needs to be adjusted for the skater’s needs. Figure skating blades have special holes in the blades to allow them to be temporarily mounted and moved back and forth, while the skater breaks in the boot.

When the skater and the instructor are happy, the blade is then permanently attached to the figure skating boot. At present, this is not an option for hockey players, so finding someone with experience in adjusting mounts for skaters is the best direction a coach can take when faced with this kind of problem.

One other huge oversight when considering blade location is the fit of the boot. If a boot is too big for the skater, imagine where the blade is located on the foot. A boot should only allow 1 to 1-1/2 sizes of growth room, allowing the young skater a chance to grow into their boot before the boot breaks down (those deep creases that show lost ankle support and loss of boot life).

Parents need to understand that two or more sizes in a boot does NOT mean they won’t have to buy new skates next year. In fact, an improper fit speeds up the break down process and puts the narrow arch of the boot forward enough to put pressure on the widest part, the ball of the foot. To fit a boot, slide a skater’s foot to the front of the boot and look at the space left behind the heel will tell the coach how much room there is in the boot. The width of a pencil, or ¼ inch, is approximately one full size. The width of a Sharpie Marker or a man’s pointer finger is usually 1-1/2 size of extra room, allowing growth without giving up skating performance. Add a second insole under the existing insole to fill that room in the boot left for growth.

Do not use multiple socks, as this will promote movement in the boot and loss of performance, much like rental skates.

Also, both skaters and coaches need to know that it is not the top eyelets that need to be the tightest. It is the eyelets at the bend in the boot that hold the heel in the pocket that are the most important, usually a group of three holes located about two or three holes down from the top of the boot. Only when the heel is firmly set into the heel of the boot does the skater gain the full potential of the boot’s support and blade location.