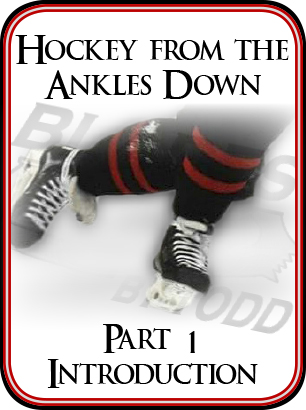 This article was written and published in 2001.

Every year there is new equipment in the Hockey industry, and some references to heat molding and other types of equipment may become out of date. The information on Hollows, Mounts, and the fit of boots, has not changed and is unlikely to.

HOCKEY FROM THE ANKLES DOWN

A cold front came in over night at a small rink in the south east. We were the visiting team and I had just had my skates sharpened by someone I did not know. We were the first game and I was the first to hit the ice, and within only a few strides I knew something was different, the speed was incredible… I just kept on going!

As a young Bantam this was the first time “skating” felt so effortless, and I had been skating since the age of 6. That feeling and that game has stayed with me, and though I didn’t know why then, I did know it all had to do with the sharpening that day. Today, I know so much more and can probably take a good guess that the hollow in my skates was very shallow and because the rink was so cold, the ice had become very hard.

I look back and wonder why no one had taught me then that hollows have actual measurements other than deep or medium, and those hollows should be adjusted according to the ice you are skating on. As a young skater, all I knew was that I liked my edges sharp. After that day though, I would have loved to have known how to maintain that freedom, and speed, and that slightly out of control feeling that gave me such a thrill…I would have had my skates done that same way from then on.

You would think that today’s players would be smarter than I was over 40 years ago, but then again, how do today’s players learn about their equipment? The majority of the players learn from each other in the locker room or from trial and error. Even worse, some never do learn that some of the difficulties they have on the ice require only simple fixes.

I have spent time with “professional” hockey players, educating them on hollows, mounts, and proper fitting techniques for boots, yet this is information they should have had when they were Peewee age players. Today’s coaches teach skills, systems, off-ice training, and even nutrition, but I have yet to hear a coach talk to his team about their skates.

Somehow, I find that almost negligent, since there are few things that have more impact on the accomplishment of the fine skill of skating than their skates and how they are maintained. Consider the possible futures of our young hockey players if they at least had a basic knowledge of their game from the ankles down…